Falling to sleep, and waking up to the sounds of the rainforest; birds, frogs, insects, all cooing to each other, while rain pattered down on the roof on my treehouse, is the most soothing feeling I have ever experienced. I would slowly rise, have a hot shower, (the shower having an arm of the tree running through it), while I looked out over the open rainforest canopy below, and then dance myself dry on the open balcony because there was literally no one else around. I spent hours every day, especially when the rains came down in the afternoons, just swinging gently in a hammock and watching the forest around me; the river rushing by, the birds in the trees, the bright blue  butterflies, and a peculiar kind of Costa Rican squirrel.

It did not disappoint: as cheesy as it sounds, here I really felt like I went back to nature, and I felt an incredible sense of wellbeing from being far from the stress of modern life, traffic, noise, and other people. I spent my birthday ziplining in the forest canopy. I hiked to a waterfall with a volunteer and we swam and then sat under the force of it coming down. We ate mammon chinos, a fruit that grew from the trees all around us, and in the evening they even brought me a birthday cake. (The surprise was somewhat spoiled when a gecko, munching his own dinner on the ceiling, dropped a grasshopper, which hit my fork and decapitated him- the head landing in the middle of my piece. I guess some things will only happen on travel birthdays). 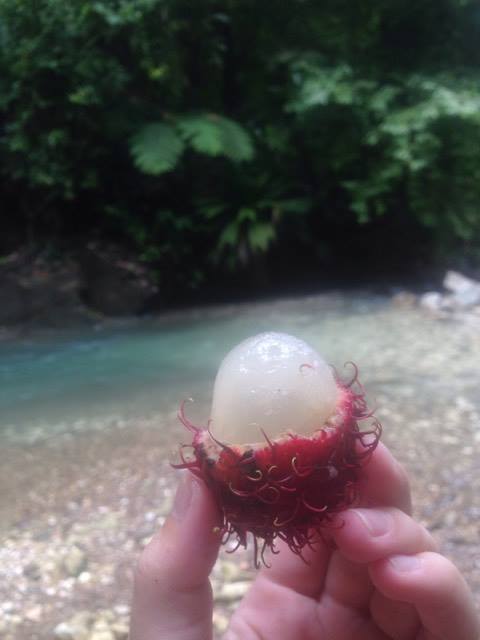 Trying to stay with nature, from here I went to Manuel Antonio National Park. Leaving at the crack of dawn, a group of friends and I arrived before the hordes of tourists came, and were rewarded with totally empty, perfect tropical beaches. We swam in paradise and then hiked the sweaty trails in search of what we came for: monkeys! We heard them before we saw them: howler monkeys, as much as am in awe of them, slightly scare me with their haunting groans and big teeth. We were also extremely lucky to see a snoozing sloth, seemingly smiling in his sleep while he dreamed.

When we got back down to the beaches three hours later they were rammed- but the people had also drawn out the capuchin monkeys (blanco carro) which were everywhere- and completely tame! In search of snacks to steal from tourists, the distraction gave a good chance to get some close up photos- but if you are going to swim at this time, leave a bag with a friend or tie it to a tree because the monkeys have been known to run off with them.

In the moonlight on a dark, deserted beach, a mother turtle has just lain her eggs in a pit she has dug herself into. While we peer, trying to not be too intrusive, she uses her flippers to kick sand back into the hole, covering her babies to protect them from prey while they develop. She is vast: this species is a green turtle, and this one must have been four foot long. When she has finished, she heaves herself out of the hole and makes her slow progress back across the sand to the water. Watching as she tips herself into the waves, and was going- going- gone- was strangely moving. Animals never cease to amaze me, and the fact that turtles navigate whole oceans while somehow always being able to return to the same beach to lay blows my mind. This was Tortuguero National Park, Costa Rica’s prime turtle laying spot, with visits from four different species throughout the year.

If you have ever taken a night-time boat trip in the pitch dark through a river infested with crocodiles, you will know how much my sense of peace was disturbed on our glide back to the mainland after this magical experience. What I didn’t know was the crocodiles were not what I needed to worry about: my wallet was stolen from my room that night while I slept.

I comforted myself from this slight wound to my confidence as a traveller in the thermal springs of the Arenal Volcano. I splashed out a bit on visiting the incredible Baldi Hot Springs which was exactly what I needed for my mind and body. They have 25 pools of varying degrees of HOT, a giant Jacuzzi, a natural cave sauna, an up-market buffet lunch or dinner included in your day pass (as a traveller on a daily  budget I’d decidedly blown,  I ate until I could only waddle back and crash into the nearest pool to recover). They even had three giant sliders into the biggest of the pools, for those of us who liked this kind of thing but also weren’t quite grown up enough for it. Needless to say I queued up multiple times amongst the children.

I spent the last week in Costa Rica on a tour of hippie beach towns in beautiful Guanacaste. Montezuma may be my spiritual haven (if I believed in spirits); it has a beautiful, easy-going, accepting and hippie vibe, a beautiful beach, good music, and I stayed at the incredible Luna Llena hostel, which was an oasis and my favourite in this whole trip. I also stopped by Santa Teresa and Tamarindo, which again had the most stunning, scorching-hot beaches, were full of surfers and cool skinny girls covered in tattoos, and had a general air composition of around 80% weed. 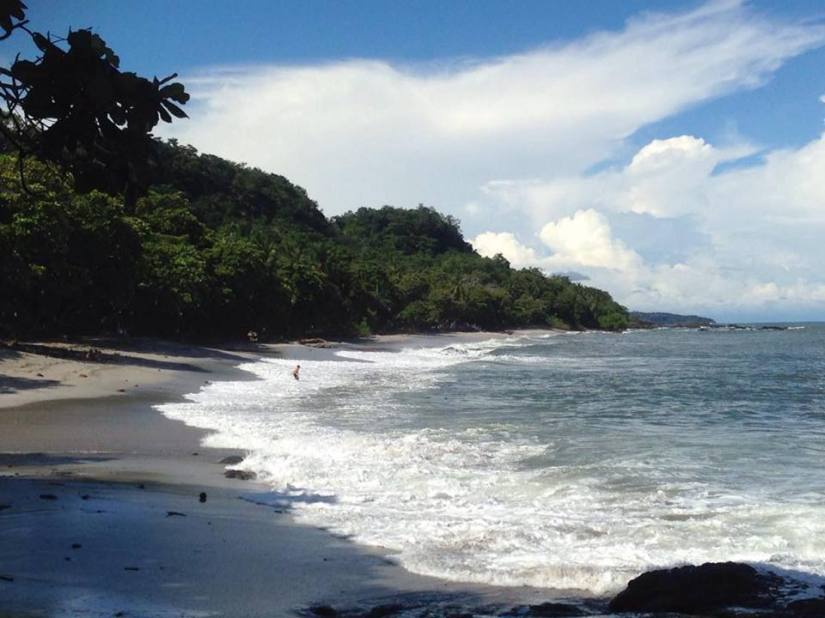 The things I loved about Costa Rica were first and foremost some of the most spectacular nature on the planet. It is an incredibly diverse country; they have 6% of the world’s biodiversity, even though it takes up only 0.03% of the world’s surface. They are also generally more progressive than their neighbours; they have no army, and last year 100% of their energy came from renewable sources. They are a veggie/vegan haven. Everything is chill, or pura vida, as the locals say to just about anything. The only thing I did not enjoy was the cost to get in to see the nature; come to Costa Rica to get back to your roots, but only if you have a pocket full of dollars to bleed away with at least $50 per activity. I had the most incredible experiences, but I landed in Nicaragua with no wallet and a lot less in the bank than I intended, too. Just as well I still loved it.