Nicaragua is undoubtedly the hardest place on my Latin American adventure to be a vegetarian or vegan- the former is a barely grasped concept, and veganism really barely exists. That said, there have been some fantastic spots I’ve been while roaming the country with delicious, healthy food. Unfortunately because it is mostly gringos that go there, the prices are a lot higher than the average food in a local comedor, and I’ve mostly eaten in.

Being gringoville, Granada is an easy place to find vegan food. Although there aren’t any specialist places, most of the cafes and restaurants offer something. The Garden Café is a haven with a vegan salad comprising of cucumber, tomato, onion, leaves, hummus, chickpeas, grains, flaked almonds and pitta. They also do a chunky hummus and avo sandwich. Pita, pita also does a hummus falafel salad plate, though at great expense.

In Managua, the amazing Ola Verde has a huge range of delicious options including this lentil moussaka with an amazing cashew cheese topping. Portions are a bit small for the price, but they also have a deli counter selling the sexiest tomato hummus, natural peanut butter, tofu, and pots of pre-made couscous salads, marinaded tofu, proper dark chocolate etc. For other staples head to whole food shop La Naturaleza, which is basically the only place you will find a good range of soy based burgers, smoked tofu, and other healthy things.  The bookshop Hispamer has a gorgeous café which is a haven in the city which serves the best smoothies ever and an amazing quinoa salad, which you can ask for sin queso. A bit out of town but near to my house was the Restaurante Andana, worth a cheap taxi ride for a low-cost, local style vegetarian buffet meal, which when I went included the usual gallo pinto, plantains, salad, and a veggie burger. They also do a big range of salads and smoothies. 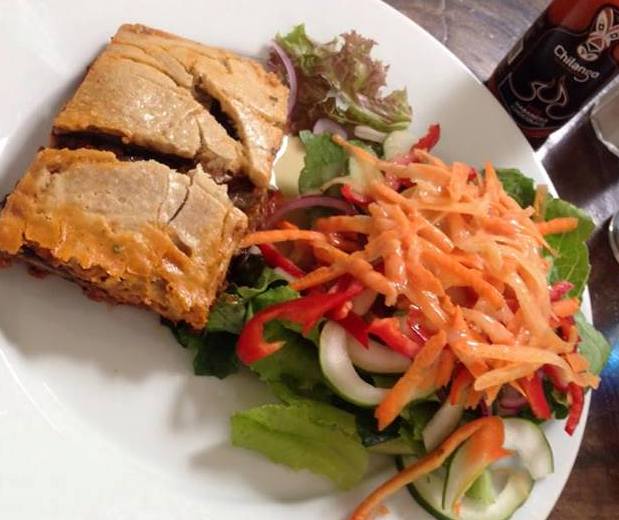 If you are thinking of doing Spanish lessons, the beautiful La Mariposa eco hotel and Spanish school is set less than an hour out of the city in the small town of La Concha and includes vegetarian, organic, home-grown food as part of the bundled price.

In Leon head to the beautiful Casa Abierta, the most peaceful eco-hostel with a lovely relaxing vibe. Or if you’re just there for the day, still drop into their restaurant which has an all vegetarian, and largely vegan menu including salads, burritos, pastas, and really unusual smoothies. I had the falafel salad with the best vegan mayo- or if you are a veggie, my friend had the goat’s cheese topped with cashews which was also delicious, especially paired with a colibri smoothie of fresh orange, passionfruit, and basil. 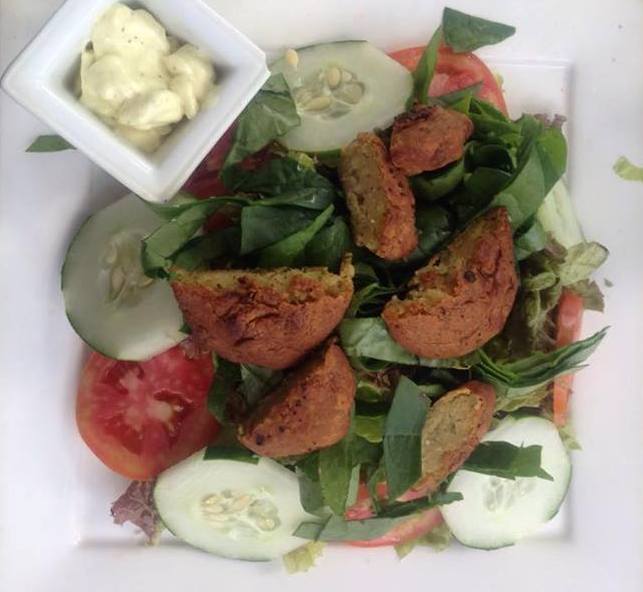 Though I generally prefer independent places to chains, Casa Del Café, which is omnipotent in Managua, does an exceptionally affordable lunch menu where you can get a salad, soup, and drink for just $5 which is great when you’re on the run or need an easy, cheap place to go. Their chia pudding is also creamy and immensely satisfying. It’s also worth knowing the supermarket La Colonia does a breakfast for just 45 cordobas (just over $1) which includes gallo pinto and a tortilla (which is vegan) or if you are a veggie, also a fried egg, and a slab of Nica cheese, with a coffee.

On the whole it’s not easy- I tried to explain in multiple ways not eating meat and still got served ham- but if you can find the right places, there’s lots to choose from in Nicaragua and supporting those business supports a better, healthier, and more sustainable lifestyle- so go for it!

1 thought on “Surviving Nicaragua on a plant-based diet”