What do most people think of when they think of Colombia? Cocaine, Pablo Escobar, gangs, civil war, fiery women with boob jobs…. Most likely. Throw away all your stereotypes and misconceptions about Colombia (well actually the last one is partially true)- but Colombia really has undergone a remarkable change in the last years and, particularly since the signing of the peace agreement has become THE up and coming place to travel- so you’d better get there while enough people are still scared of it before it becomes the next over-sold tourist trap. While my family at home worried about Colombia, everyone I met travelling since I arrived in Bolivia had done nothing but rave about it- so what is it about Colombia?

Colombia has an insane, irresistible and infectious energy. It emanates from the people, who are, without a doubt, the warmest, most excitable, passionate and positive people I have ever met in my life. I don’t believe there is a single shy Colombian. Considering everything the country has gone through in the last decades, they are just so positive minded, and excited to see you, and welcome you, as a gringo, because as more than one of them told me, our presence there is a real mark of how much the safety situation has changed for the better since the dark years in the past.It is also incredibly beautiful, has several waves of fascinating history to unearth, phenomenal landscapes and very cool, modern and metropolitan cities.

I arrived in Cali, the city of salsa! To be honest, there isn’t much to do here except go out and dance salsa, which the locals seem to do every night of the week until five in the morning. Colombian men seem to be constitutionally incapable of seeing a woman not dancing for more than about four seconds before addressing the outrage and hauling you to the floor, however much your stiff and awkward British limbs protest. I am convinced that Colombians must just have more joints than we do because with however much enthusiasm I try I cannot for the love of God imitate their swirling, shimmying grace- or keep up with the tempo!

From Cali I went to Salento, which may be my favourite place in Colombia, it is so breathtakingly beautiful. People come here for two things: hiking and coffee. The mystical ‘Valle de Cocoras’ is a cloud forest with deep,  beautiful sloping landscapes shadowed by wax palm trees. These are not any old palm trees, but skyscrapers reaching between 45 and 60m high. I’ve never seen a view like it. To get there from the town you hitch a lift on a car called a ‘Willy’ (yes, seriously, queue a day of willy-based jokes) which they cram with more people than you think should physically fit in one vehicle- we ended up standing on a small ledge on the back of the truck, desperately clinging on to the roof bars as we were flung around corners and went flying over bumps on the off-road track. The other thing here to do is visit the coffee plantations and see how it’s grown- which I didn’t have time for- but I can verify that, as a Brit that generally prefers tea, the coffee here is delicious. 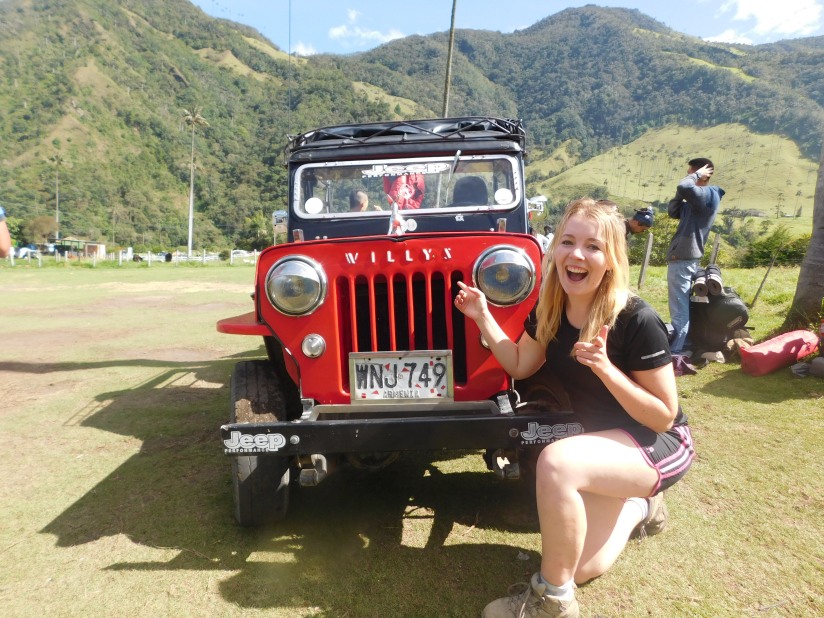 Medellin. I liked it so much I seriously looked into the feasibilities of living there. Everything here is brilliant. The vibe is bursting with friendliness and warmth. The climate is perfect- hot but not too hot, and cool at night. It’s seriously modern- you can easily live here with all the luxuries of a developed country. There is street art everywhere, music pumping from every corner at all hours of the day and night, loads of veggie and hipstery restaurants, cafes, and bars, and, if you’re going to be the tourist, the best walking tours I have ever done. They also have a wicked nightlife.

If you like street art, definitely visit Communa 13- a formerly notorious and dangerous barrio which, like the rest of the city, has undergone a drastic transformation in the last few years. Modern escalators carry you up the sheer hill where you can wonder around the colourful narrow winding streets in which every surface is covered in street art. Every piece tells a story.

It’s hard to choose favourites, but I particularly liked this one- which the artist told us represents the diversity of the Colombian people, and the regenerative energy of a city in transition. 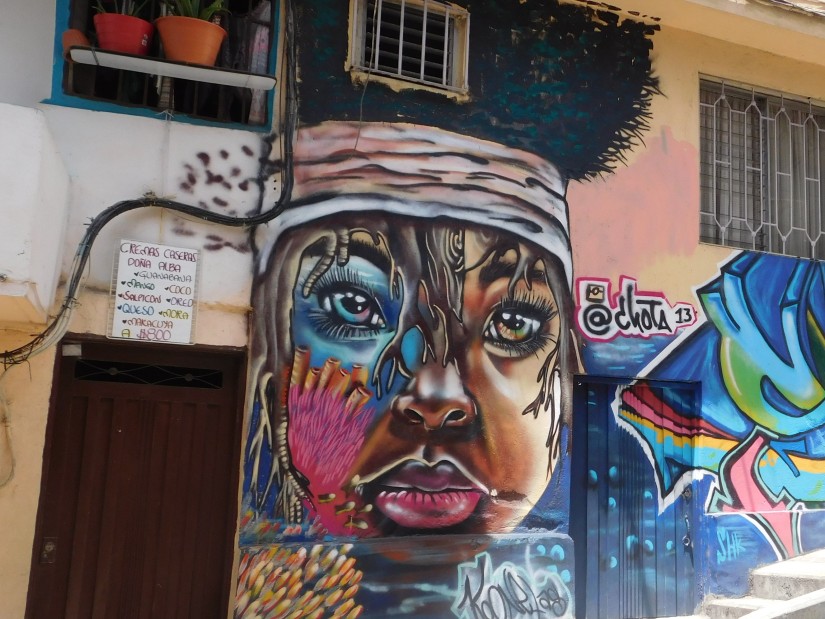 This one represents the sadness of the community’s past on the gloomy and grey right, the throwing of dice the actions of the government that gamble with the people’s lives, and the left, the colour and life that has flourished since Medellin has come into its own and become a safe and flourishing city. 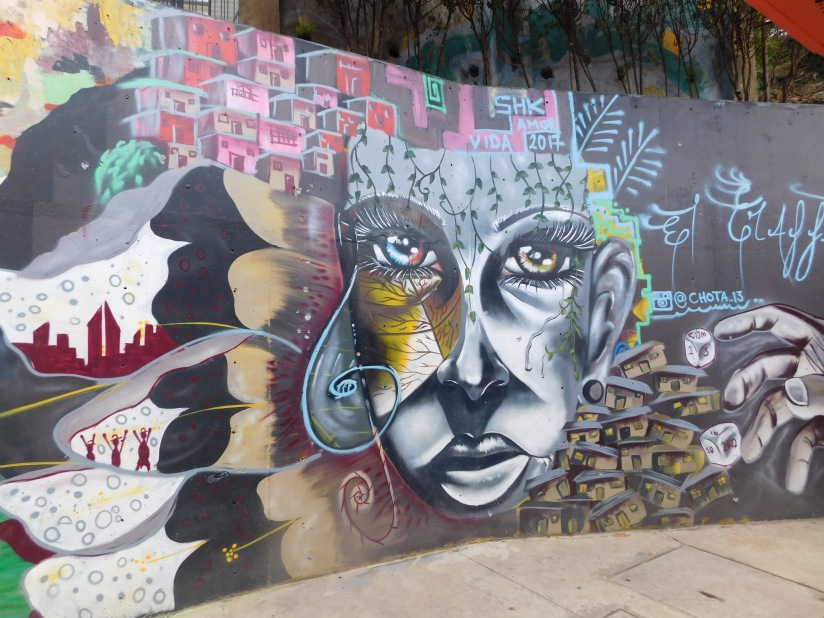 Cartagena is a city of contrasts between old and new: the historic old town is like walking back into the colonial past, with it’s colourful winding streets, little houses with pretty verandas, and looked over by the castle which has a fascinating history of battles, sieges, leprosy, and pirates.

But from here you can look over the modern metropolis that has replaced the Cartagena of the past: skyscrapers dominate the landscape, along with modern shopping malls. 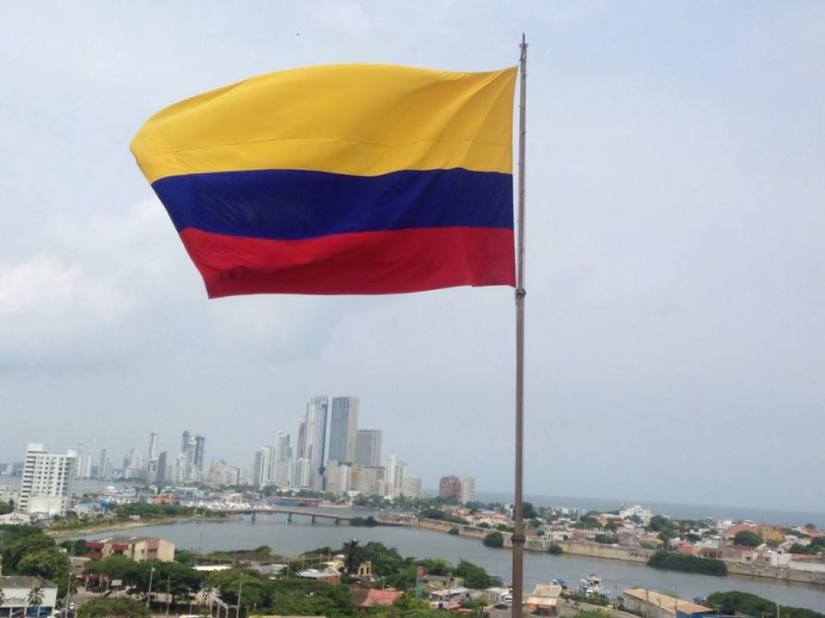 The only thing I didn’t really like about Colombia was the men. It’s a shame but their attitude kind of spoilt the overall amazing atmosphere. When you are travelling alone as a solo blonde chica in Latin America you tend to attract a bit of unwarranted attention, and though harassment in general has pretty bad in most of the countries I’ve been through, it was nothing on Colombia. I’ve never been pestered, catcalled, followed, sniffed (!) or made to feel as uncomfortable anywhere in all my exploring (even in India). I didn’t feel safe walking alone at night- and in one walk to the supermarket in the early evening (ten minutes each way) I was catcalled no less than THIRTY SIX times (I started counting when I became seriously fucked off after about three minutes of this happening). Usually I overlook this kind of thing but there is a turning point where it goes from being pathetic and contemptible to- as much as I hate to admit it- actually a bit intimidating just existing and walking around as a woman. And that isn’t cool.

On the whole though, Colombia felt safe, full of life, and is amazingly cheap to travel in, and I would go back to it and recommend it in a heartbeat. No doubt there are still remnants of the past around (if you get a long distance public bus expect it to be stopped while police search everyone’s belongings at least once). A lot of people are happy about the peace agreement, a lot of people still believe there should have been harsher punishment of those who were responsible for so much death (depending where in the country you are and the extent to which people were personally terrorised  by it). However, on the whole, even those who disagreed with it said how much safer- and happier- they feel now compared to ten years ago, and are looking forward at last to a flourishing Colombia. And everywhere I went they had the same message- tell your friends to come and visit us too! So what are you waiting for?