‘Helen, the camp is burning down’— this is the text I received from a friend a few hours after I had fled home from volunteering at the Dunkirk refugee camp because I felt things were seriously unsafe, dangerous, and poorly managed by the French authorities.  Still a bit shaken from the things I had seen, I told my parents over a strong drink ‘I just have this feeling something terrible is about to happen’.  Within the hour heard the news that a huge fire had broken out in the camp which could be seen from the volunteer residence (a good 20 minute walk from the camp through a lot of forest).

Image of the fire shared by media. Source: Getty

My immediate panic was for the people. Have they got everyone out? Where are they going to go? And uncontrollable anger, because if people were killed as a result of this the government MUST be held to account for the gross neglect that led to this situation, which could have been avoided if it wasn’t for the total absence of organisation and humanitarian oversight to deal with the unfolding crisis. In particular I was scared for the many children, and devastated this could happen to them in the place they were supposed to be escaping danger no one should ever live through, let alone at such a young age.

Thankfully I was told that all the residents were standing outside the camp. I’ve now learned from the news that about ten have been injured, some stabbed in the fight that broke out that led to the fire, apparently between Kurds and Afghans. Most of the people that were living in the camp are Kurdish, from Iraq and Iran, but since there have been more Afghans arriving following the demolition of the Calais camp, and the situation had become overcrowded and tensions had increased as people were forced to live in unimaginable squalor.

I am worried that the right-wing media will interpret this incident as a way to further demonise refugees. From my perspective, having spent the last week working in the camp, something like this was inevitable. The conditions in which people were forced to live, and a lack of professional humanitarian management have created and exacerbated a situation that is now extremely dangerous, in which the majority of people, who are harmless, ordinary people forced to flee war and terror on a scale we can’t imagine, have become further victimised and endangered while seeking refuge from one of the most developed and wealthy nations, France, and being denied refuge within another, our own ‘Great’ Britain.

This news report claims that Kurdish refugees were living in ‘chalets’. The reality is that in this camp that is ‘internationally recognised for meeting humanitarian standards’, up to 8 people shared ‘shelters’, that are little more than small, filthy, dark, dingy, and rotting garden sheds, with no heating or electricity. I am amazed they survived the winter. They had no safe way of cooking and so many are going to be permanently damaged from the smoke pollution. Disease is rife and many people suffer from scabies. The huts were packed together, and the camp is so overcrowded, that it’s no wonder that if a fire started it would spread quickly. The people have nothing, and are forced to beg volunteers as we pass by for a pair of shoes that aren’t falling apart, or a blanket to stay warm at night. People are desperate. And in this environment, a mafia group has taken a lot of control. Though the media frequently presents these gangs as typical refugees, the reality is that most people living on the camp are as scared of them as we would be, and have lived in this fear unable to escape for a long time.

A picture of the camp I took before the fire

This is well known to the company that manage the camp ‘Afeji’. I should have taken it as a warning sign that Medecins Sans Frontieres (MSF), a world leading humanitarian organisation that created the camp, pulled out several months ago (though there seems to be no publically available explanation as to why). Afeji seem to be little more than a logistics and so called ‘security’ operation, with no real interest in managing or preventing the criminal activity within the camp that victimises those with less power, including women and children. It is widely known that human traffickers operate within the camp, but no steps are taken to prevent exploitation of those that are desperate enough to be forced to turn to them for help.  And why do they take such a risk? Because we fail to offer them a safe and legal way to find passage to safety.

To describe the various dangers and failures in the camp would take a lot of words, and I will have to share this at another time once the situation is better understood and there has been more time for reflection. I had intended to write about the people of the camp, and their lives, and share their stories so that people better understand the situation for refugees in Europe. I had intended to stay for a month volunteering in the Women’s Centre. I knew the conditions would be difficult and potentially dangerous, but I had imagined that there would be organisation and systems available to support volunteers, most of which, including me, are relatively young and not trained to deal with humanitarian crisis situations such as this. This proved to not be the case and within the first few days I was unhappy with the situation on various levels. Over the weekend you could feel the tension in the camp rising, and on Sunday we were forced to close the Women’s Centre after an incident and leave. I felt at serious risk for my personal safety and that of my fellow volunteers, who felt the same.  I really felt we were lucky to get away without injury.

There were various other things that had happened, both in and outside the camp that meant even the accommodation provided from the local council didn’t feel safe or secure. I couldn’t sleep for anxiety. I was worried what would happen the next day on the camp and from an awful premonition of danger.  I struggled with the decision to leave all night. A friend made the point to me ‘do you feel like you can genuinely improve this situation?’ and in all honesty the answer was no. I was not equipped to deal with this. It should never have been left to un-managed volunteers to step in where the government has failed, it puts both the volunteers and the vulnerable people on the camp at great risk.

At this point I strongly feel that the camp needs specialist intervention. The volunteers that work there are incredible people-  brave, selfless, and endlessly giving individuals, some of whom have been there for many months and given up their whole lives to support vulnerable people they otherwise may never have met. Those people have my endless admiration. But we were still really only a bunch of well-meaning lefties in our early twenties. What is really needed is for a humanitarian organisation or body to take control and provide the support of staff that have specialist training for crisis situations such as this. An organisation that will work with the authorities to ensure that in handling this situation now, refugees are treated as people, with rights, who deserve respect and support, and safety. 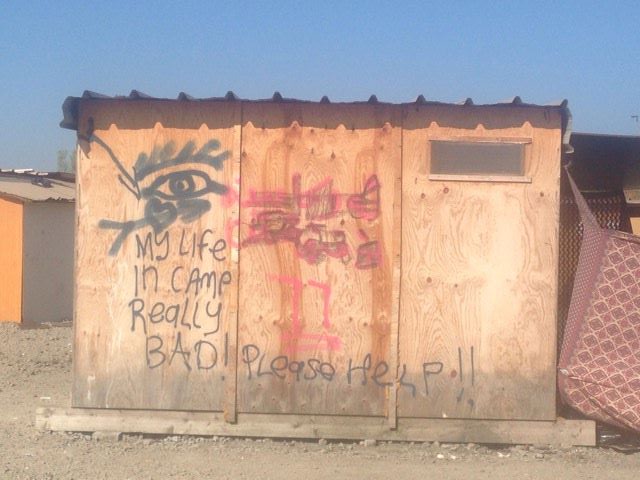 It is well known that the government really wanted to shut down the camp soon, knowing how out of control it had become. As I have written this news has come through that the authorities will not rebuild the camp. My fear is that all the poor people who had lived in the camp will end up homeless on the streets, as has happened in the aftermath of closing the Calais jungle, and victimised by police treating them like criminals. I heard stories from volunteers who had gone to Calais of disgusting cruelty to homeless refugees from the police, who slept at night on the streets with their sleeping bags open, because there had been incidents where they would be sprayed in the face while they slept (with some kind of pepper spray or immobilising agent, I was not clear) and then seized while they were unable to get out and run away.

It was some of these people who were coming to the camp in search of refuge after the Calais ‘Jungle’ was shut down. The situation would never have got this bad if the French and British governments had dealt with that crisis in a responsible and humane manner. As it was, they drove these people into this situation and now should bear the burden of responsibility for de-escalating it and creating a stable environment in the aftermath. I do not believe in all faith that they will step up.

We (British and French), or at least our governments, are complicit in creating this atrocity from our intervention in wars in the Middle East in the last years that has exacerbated danger to the point that people have had to flee to our shores. And our governments are directly responsible for this happening right under our noses, only just over 100 miles from London. 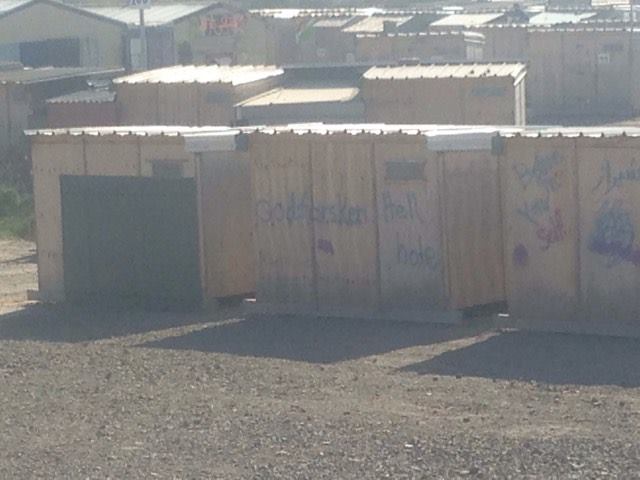 Another picture of the camp before the fire

As the aftermath unfolds we must put pressure on them to take a responsible and humane course of action. I don’t know now what will happen, and what assistance will be needed, and if I will need to return to help. I am waiting to see news of some plan of action.

For now people have been temporarily taken to local gyms to stay, and there is an emergency appeal for donations to replace what was destroyed, including food, clothes, blankets and sleeping bags, emergency blankets, shoes and trainers, and backpacks. Please, please donate if you can. I am very afraid for what will happen to these people.

Let us support refugees and demand a different approach from those in charge. We must, for once, act with humanity, and with love. Though I am not religious, I pray for these people’s safety.

I will write more in time. Keep watching the news.