An endless expanse of blue sky, and white so bright it burns your eyes, there’s literally nothing for miles around… and it’s bloody cold. The Uyuni Salt Flats are the main reason so many travellers (including me) are keen to include Bolivia in their travel bucket lists. I’ve been lucky to see some mind-blowing places in the last few years, but the landscapes of Bolivia are like another planet.

If you’re going to go, there’s no point doing the one day Uyuni tour that only includes the Salt Flats. Like so many of these things (like the Taj Mahal for me in India), sometimes when you have seen a dramatic picture a thousand times, the main event is actually less exciting than the surprisingly incredible side-show. So it was on the Uyuni tour, where, fantastic as the salt flats are, for me they were overshadowed by the spectacular lagoons, crazy cactus island, wildlife, and volcanic geysers.

Getting the famous mind-bending perspective shots on the salt flats is actually harder than it looks. Our lovely guide Herman, while thankfully not a drunk-driver (apparently a common problem on these tours- so beware!)  was also the world’s worst photographer, and it was kind of hilarious as much as it was frustrating that between all of us we found it literally impossible to get both us and a plastic dinosaur/beer can/hat in focus at the same time. Here are some terrible examples:

Never mind. I was never going to be the type to get insta-famous anyway. We watched the sun disappear into the salt flats, and then drove on a few more miles to our hostel… which was made of salt. The floor, the walls, the table and chairs… one of the weirdest places I’ve ever stayed.

There are so many mind-bendingly beautiful lagoons in Uyuni, surrounded by mountains, each glowing their colour namesake ‘azul’ and ‘verde’, reflecting the minerals that are rich in their make-up.  Without a doubt the highlight is ‘Laguna Colorado’, the red lake. Inhabited by flocks of flamingos, it really was other-worldly, and I had to stop for a long time to remind myself it was real. 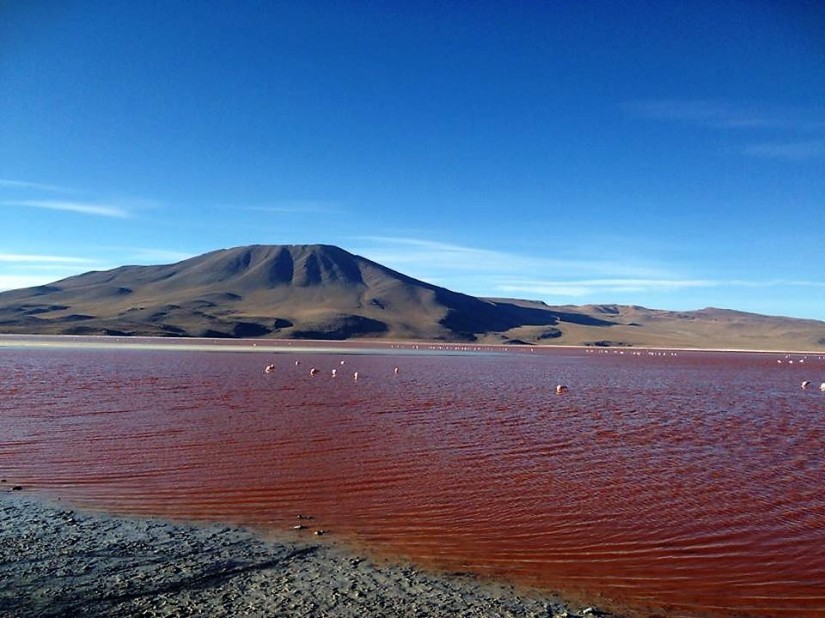 The place we stayed that night was pretty bleak. It was so far in the middle of nowhere, and they only get electricity for two hours a day. Having worked for the last three years at the awesome international development charity, Practical Action, which amongst many things seeks sustainable solutions to ensuring off-grid electricity access in rural and impoverished parts of the world, I finally got a genuine glimpse of what that means for the reality of people’s daily lives. People were so poor here they apparently couldn’t afford plates from which to eat breakfast, and there was only one place in the village that evening that had heating… a bizarre little shop/pub in the middle of nowhere. We bought an incredibly bottle of disgusting Bolivian wine and tried to warm up around the wood-burner…

On the last day of the tour, you wake up at 3 am. I’m not generally happy to do this for anything, but the chance to see volcanic geysers at sunrise is a good incentive. I feel like I’ve said this a lot about Bolivia, but it was the weirdest thing I’ve ever seen… getting out of the car felt like landing on Mars, if Mars smelt like the unique evil of  post-egg curry farts. The ground was alive… literally belching and rumbling underneath us. As we peered, fascinated, into the bubbling pits, we were warned not to breathe too much sulphur and to walk on the right side of where wind was blowing boiling steam into the atmosphere, or risk being burned. 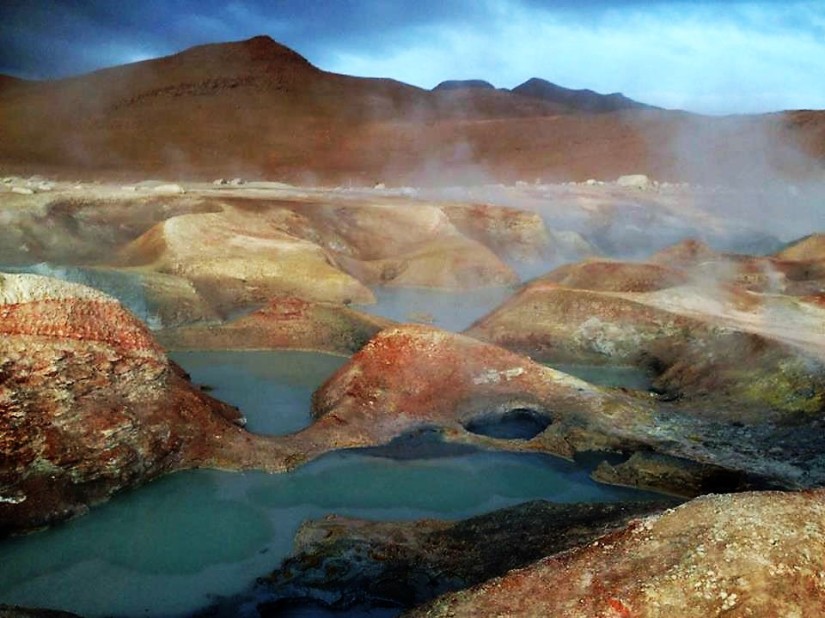 Bathing after in a hot spring fuelled by the volcano has to be the best view I’ve ever had while taking a bath.

After briefly returning to the city of La Paz, and stumbling into the Gran Poder carnival (picture below) I continued towards Peru and Lake Titicaca, ‘the world’s highest navigable lake’. 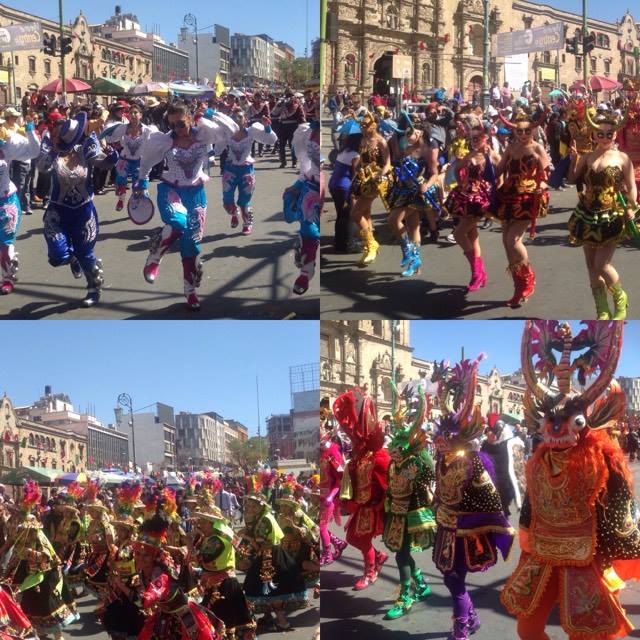 From the Bolivia side, you can visit the lovely but unremarkable ‘Isla del Sol’ from the little sunny town of Copacabana. The experience from Peru, in my view, though, is much more exciting.

Most visitors come for one day and experience only the Uros ‘floaitng islands’. Here, 1200 people live on 87 floating islands that are literally made of reeds. Three metres of reeds are constantly replaced as the bottom rots away, and they use sticks to anchor themselves in position. These people fled the shores of Lake Titicaca to form this bizarre existence in order to escape colonial violence, and have been there ever since, now living only from hunting, fishing, tourism, and selling textiles. They have been adversely affected by climate change, as our very wet experience of the ‘dry season’ demonstrated, but even there they have made attempts towards a better future- with solar panels installed in the reeds in order to power the radio. It’s an awesome thing to see, but no doubt somewhat Disney-ified, and incredibly touristy. 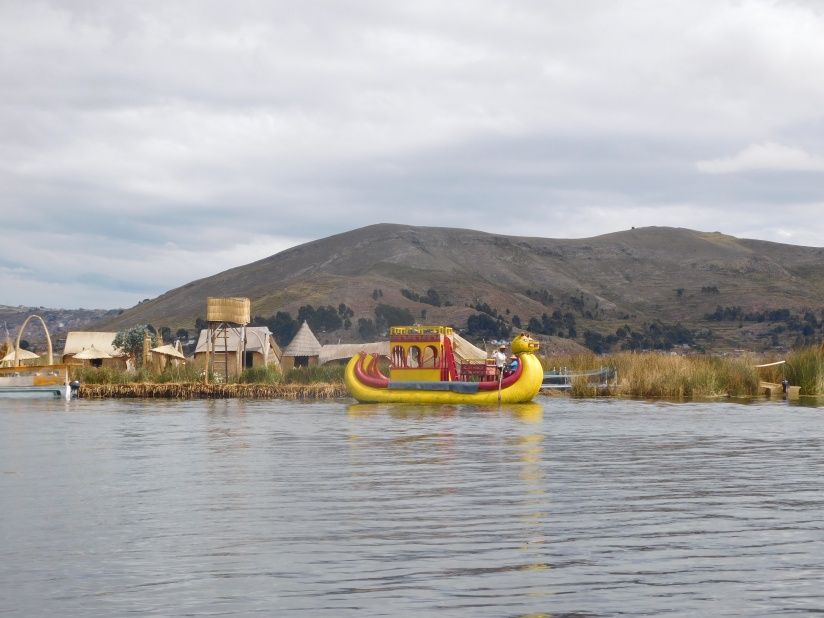 If you have more time and want a more authentic experience, take the boat a further three hours to Amantani Island. Here I stayed, with two friends, with an Amantanian family overnight on Lake Titicaca. Staying on this unspoilt island is like stepping back into the 1950s, and provides excellent hiking opportunities, if you can hack the altitude, to the shrines on top of the hill to ‘Pachamama’ and ‘Pachatata’. In the evening there was a live band playing Peruvian music, we were encouraged to dress like the locals (see Mel and I looking bangin’ below), and spent one of the most bizarre nights of my life with about 50 people (locals and tourists) doing a kind of high-speed sideways conga to Peruvian pipe music, fuelled by local beer… we slept well.

Watch out for my next blog as my adventure continues through the west coast of Peru!