The monster is alive, a molten red beast of fire that spurts and belches out of the deep, its searing redorangeyellowredlight turning, twisting, and changing in front of us, mesmerising in the total darkness. Bats swoop into the belly of the beast, daring each other to get closer, before swishing back into the night, laughing, chirruping to each other. I am standing on the edge of a live volcano.

It was one of those moments where you realise just how small, just how utterly insignificant you are, in the history and vastness and power of the earth. Where you feel high on just looking at the power of nature, sucked in by it, at war and at one at the same time.

Nicaragua is born out of its geography and has been blessed and devastated by it in equal measure. It is home to nineteen active volcanoes, which could erupt at any moment, and its people have suffered from earthquakes and tsunamis in very recent history. It is also home to lush jungle, wild sloths and monkeys, rare turtles, and the most mind-blowing sunsets you will ever see. 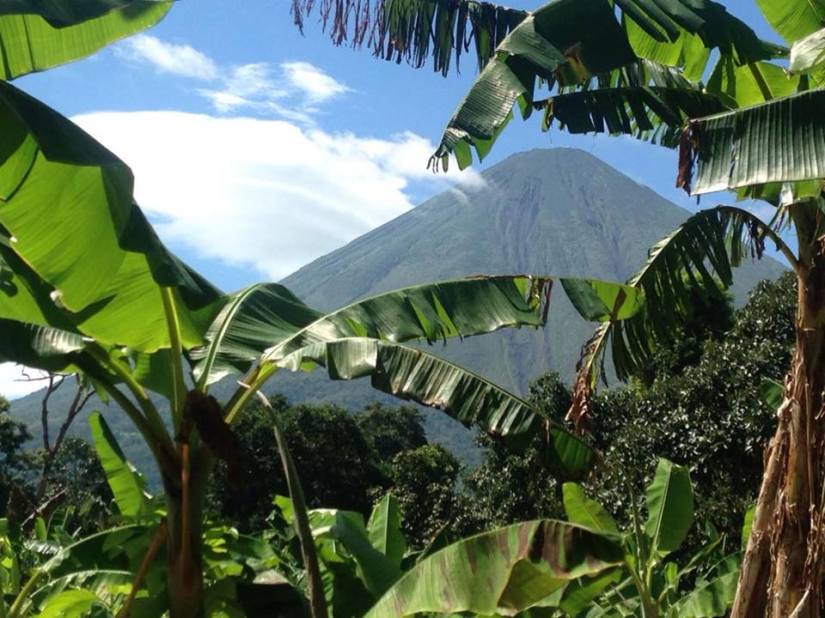 Living in the Nicaraguan capital of Managua was not fun in the way that a lot of my time travelling in Latin America was. I would honestly admit that at times it was a bit of a challenge. It is very sketchy in places, with taxi drivers casually dropping into conversation about the time that police commander was shot in the head at those traffic lights, robbery on busses widespread, and sexual harassment and abuse of women at an all-time high. In the otherwise lovely little house I shared in a local barrio, there was no water for most of the day, the washing machine was a drum outside you filled with a hose, and there was an infestation of cockroaches.  I volunteered during the week with the fantastic organisation CANTERA, a Nicaraguan NGO which works in empowering communities through loads of amazing programs: workshops on gender-based violence, sustainable agriculture, supporting the education and development of children and youth, and so much more, and met some amazing, interesting, and lovely people. But at the weekend, I was very keen to escape the chaos, the smell, the filth, and the sardine-tin busses, and explore the rest of the country.

The Laguna Apoyo is a bus ride out of the city, a vast lake where you can cool off from the searing heat with a swim, a paddle, or just enjoying  a cold beer or fresh mojito in a hammock on a perfect lazy weekend. Go a bit further and you get to the tourist hot-spot of Granada. Sure, this is gringo-ville, but it’s popular for a reason- attractive in every way Managua is not; the iconic, butter yellow church, the colourful houses on pebbled streets, the horse and carts, the volcano omnipresent on the horizon. If you rent kayaks on Laguna Nicaragua you can glide through las isletas and the isla de los monos- monkey island in particular- which lives up to its name- as you paddle up, the monkeys descend slowly by their tails to greet you, hoping for food. In the Reserva Mombacho we also spotted a sloth momma and baby hanging lazily from the branches of a tree.

If you make it out to Isla Ometepe  you can hike volcanoes, swim in natural mineral pools, kayak with crocodiles, or just watch the most fantastic sunset over the lake and the undulating landscape. You can either get the ferry over, which was easy, fun, and not that slow, or you can get a tiny plane onto the most precarious looking airport I’ve ever seen- a slim strip of concrete between the sea and a volcano. Your pick.

Though you should come to Nicaragua primarily for the nature, the cities are pretty interesting too- particularly Leon, la ciudad de la revolucion, where you can learn about Nicaragua’s history of oppressive dictatorships, war, revolution, and the huge death toll suffered by the people in the name of freedom. In the museum, the guides are survivors who will tell you how they were personally affected- about their mothers, brothers, friends, and lovers, who were all killed. The  current political party situation seems to an outsider to resemble a so called ‘benevolent’ dictatorship; somehow seemingly less threatening because of the party-sponsored rainbow coloured playgrounds and benches, and yet undeniably corrupt and worryingly, increasingly censorious. However, when you look at the past, you can understand better the loyalty of the people to the Sandinista party, or FSLN, given the brutality of the Somoza regime, and appreciate the progress it did make possible in the early days for improving the lives of the people through universal literacy programmes and healthcare. 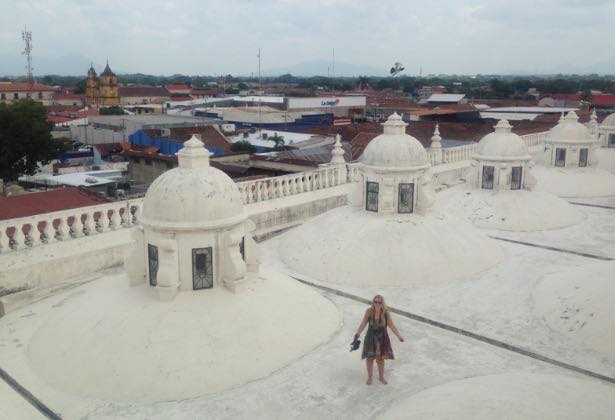 You can also ramble over the rooftops of the iconic white cathedral, the building materials of which bizarrely include eggs and milk (unless I BADLY misunderstood the guide). You will also see las gigantonas – giant parody puppets of Spanish women from colonial times- lurching around the city at up to thirty feet high- pretty scary to bump into on the way back to your hostel.

From Leon you can catch one of the crazy ‘chicken busses’ to Las Penitas, a very tranquilo beachside town which is approximately a thousand degrees, but popular because these beaches are home to some very rare breeds of turtle, including, as I was lucky enough to see, leatherbacks. People in Nicaragua have historically eaten turtle eggs, so in order to protect them, when the mother has laid they are collected and kept secure until hatching time, when they are released into the sea. In comparison to how respectful of nature turtle guides were in Costa Rica, I was kind of shocked that they encouraged us to pick up and hold the babies and to release them ourselves into the sea. I felt uncomfortable about this but since they were all being roughly manhandled by others anyway, thought it would be better to let some of them go free gently, but as much as it was amazing to see them so close, in retrospect I wish we hadn’t touched them. It can’t do them any good. Watching them scramble towards the lapping waves and finally being washed away while the sun beat pink down across the water, though, was a very special moment.

To escape the heat, Matagalpa is an otherwise average-looking city that is surrounded on all sides by a phenomenal landscape of green mountains, and is blissfully, wonderfully, cool. You can hike up to the mirador, explore the reserve, or catch a bus down to the waterfalls. It’s also far less touristy- we saw only two other chelas during our time there.

In the north of the country is the  Somoto Canyon, where, between two chasms of rock, you can scramble, swim, and jump into the depths of the water at the bottom. This was my last weekend, and the most fun.  Being carried on my back, like a human pooh-stick, with Nicaragua on one side of the rock face, and El Salvador on the other, and watching the world rush by, I couldn’t help reflecting happily on how many amazing things I had seen in the last few months, and couldn’t imagine returning to grey and cold London the next week.

I learned so much from my three months in Nicaragua, meeting people and having experiences I will never forget. At times I found it frustrating and sad; life is difficult and many people live in severe poverty. Nothing runs properly, everything is broken, everything is late, or doesn’t exist at all. But it is also a country has also achieved so much in the face of all of the things it has overcome, when it could rightfully have been wrecked by the natural disasters, dictators, and war. The people are positive and loving, and with more than half the population being youth, there is a lot of potential for positive growth the future, in spite of the challenges that lie ahead. I will remember it with fondness forever. Hasta luego Nicaragua, and Latin America. Until next time.